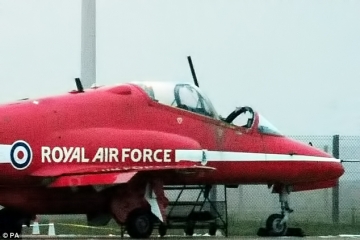 A Red Arrows pilot Flight Lieutenant Sean Cunningham flying as Red 5, killed early morning today in an ejection seat incident at team's home base Scampton. Flight Lieutenant Sean Cunningham join Red Arrows in 2011. The injured pilot was transfer by helicopter to a hospital, when he died. The team now is on a winter training program, where the new team's pilots for 2012 are in training.

The RAF aerobatic display team prepared for a training flight, when the incident occurs. The pilot ejected from the Red Arrows Hawk T1 aircraft, while he was still on the ground. RAF not confirmed yet, if the pilot died from none deployed ejection seat parachute. The case of the incident could be a pilot error, who incidentally activated the ejection seat on the ground, as the all RAF's Hawk T1 fleet would still fly. Despite this, the ejection seat malfunction is still suspicious, as all RAF Hawks fleet has been ground for a week in 2010, after ejection seat problems.

On July 30,2010 The Red Arrows were grounded for a month as the team's engeneers found problem at ejection seat of Hawks aircraft.

A few months earlier, on 20 August, another Red Arrows pilot Flight Lieutenant Jon Egging died during an incident at the Bournemouth Air Festival. Then the team's demonstrations suspended for almost 2 weeks, when the Red Arrows continued its display schedule in eight-ship formation.

This is a second tragic loss for the Red Arrows this year and we hope the last. Ironically, last week there was a memorial ceremony for Flight Lieutenant Jon Egging who died in August.