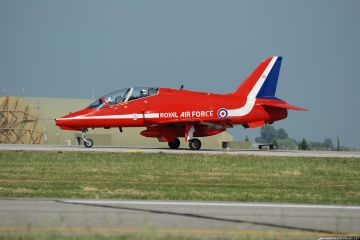 Red Arrows Hawk T.1 plane crashed yesterday killing its pilot Flight Lieutenant Jon Egging. The crash occurred during break for land maneuver at the Bournemouth Air Festival in about 13:50 local time. Egging aged 33 from Rutland, joined the Royal Air Force Display Team in autumn of 2010 flying as Red 4 Slot position. He goes straight to the ground avoiding public locations, when his plane hit the ground and start bouncing several times before stops at the bank of nearby River Stour. Flt. Lt. Egging tried to land on the field, but the ground was not enough hard to carry plane's landing. One of the gears broke and the airplane begins to bounce and start breaking apart until it fall into the river. Nose of the plane dived in the river as the tail up to the air. The pilot's body found few meter away with open parachute thrown from the cockpit as the ejection seat was at the cockpit. Flight Lieutenant Egging did not attempt to eject avoiding civil casualties. Jon Egging's wife was also in the crowd and watched Red Arrows display. This is the first fatal crash since Red Arrows flew BAE Hawk aircraft.

The team now grounded as a safety measure until the investigation finds the cause of the crash. All following Red Arrows' displays are canceling for indefinite time.

There is no official release, what caused the crash, but the lack of fire at the crash spot indicated that the plane was out of fuel. First that we suggest a bird strike as a reason for the crash is less presumably (see Aug 7th accident below). This is just our point of view and is just speculation about the incident, until the investigation goes.

Two week back, on August 7th, another incident involved Red Arrows plane, when a bird hit one of the team's Hawks and forced the pilot to make emergency landing during Blackpool Air Show. No one was injured at this incident.