Red Arrows technical malfunction on the way to Malta 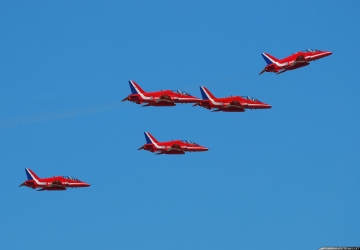 The bad luck still follows the RAF display team even to the final display in Malta International Airshow this weekend. One their way to Malta, Red Arrows team received some technical difficulties forced them to land at Decimomannu Air Base at Sardinia.

It is not clear now if one of the team’s Hawks aircraft or more experienced problems during the flight. The participation of the team in Malta Airshow is still unclear.

Less than three week ago, two Red Arrows Hawks experienced bird strikes again on the way to an air show - Northern Ireland International Air Show at Portrush. Losing the key formation positions the Red Arrows displayed on that event only with Synchro Pair – Red6 and Red7.

In August, the team performed just in six aircraft in Russia, as one of the pilots get back to the UK, because of his very ill child.

In March, the very first Red Arrows female pilot Flight Lieutenant Kirsty Stewart, has been re-assigned from flying duties, as she suffering from stress after the deaths of two team’s pilots last year. This act forced the Red Arrows to fly in seven Hawks during 2012 show season.