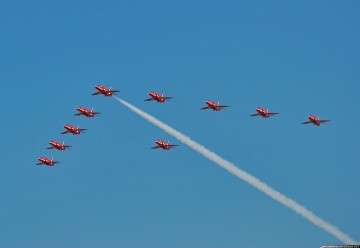 The Royal Air Force aerobatic team Red Arrows will continue to use its present home base at Scampton, Lincolnshire. UK government revised its plan to move the team at Waddington in 2014.

In 2008, the government decided to move the RAF display team to Waddington, but now the new minister hold this plan until at least the end of the decade.