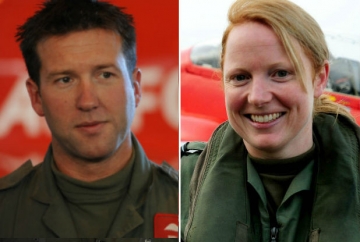 Flight Lieutenant Kirsty Stewart, the first female Red Arrows pilot and Ben Murphy, ex-leader of the team are engaged and to be married.

Squadron Leader Ben Murphy joined RAF display team in 2007, becoming in 2010 the team leader, which is the second time in team's history that display pilot become directly a flight leader.

Both of them were investigated for a love affair from Ministry of Defense in 2011, as the Royal Air Force officers are not allowed to have a relationship within the same squadron.

Now Mr. Murphy is a civilian working for a Lockheed Martin, as the Ms. Stewart is still working at RAF on ground-based role. She quits the Red Arrows in March 2012 as she suffering from stress after the two tragic deaths of her Red Arrows team-mates Flight Lieutenant Jon Egging in August 2011 and Flight LieutenantSean Cunningham just three months later.

We wish a good luck to the new, first Red Arrows family!