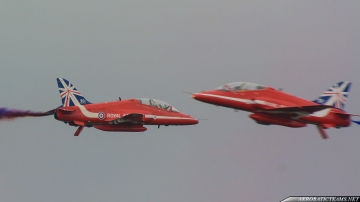 Red 6, a synchro leader at the team, hit a bird at the very last moments of the airshow and missed just the final flypast from the display. He landed safely and no one was hurt, except the poor bird.

Only the nose of the Hawk aircraft was damaged receiving a small hole from the impact. At the second day of Waddington Airshow, Flight Lieutenant McMillan used the spare plane, as the damaged Hawk aircraft proceeds to repair.