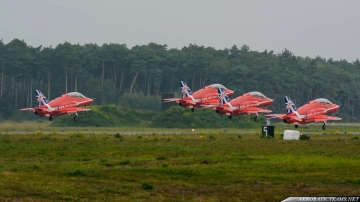 The team will fly in eight-ship formation until the end of 2011 season. Despite this the Red Arrows will canceled weekend displays, because all team's members will be at Jon Eggin's funeral. So they cancelled Portrush International Airshow in Northern Ireland, return display to Chatsworth Country Fair and Duxford Airshow.