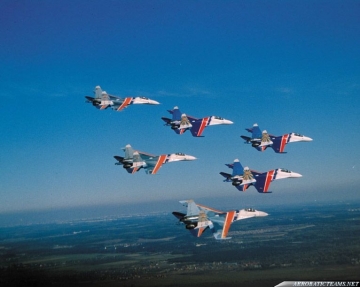 Yesterday the commander of the team Colonel Andrey Alekseev announced that Russian Knights aerobatic team would fly six aircraft again from 2014 show season. Today Russian Knights fly with five planes, celebrating its 23 anniversary, as they were form on April 5, 1991 at Kubika Air base.

Originally, the team flew six SU-27 jet fighters, but through the years, they reduced to five and even to four planes.

At the end of 2012, the Commander of Russian Air Force Gen. Lt. Viktor Bondarev confirmed that the team would be equipped with latest Russian fighters Su-35C and Su-30CM. Until today there is now indication that Russian Knight will transited to Su-35C and Su-30CM.