Russian Knights and Swifts aerobatic teams to be disbanded 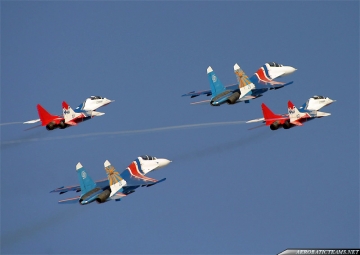 The Russian Air Force aerobatic display teams Russian Knights and Swifts (Strizhi) will be disbanded after MAKS 2011 Airshow. The teams will fly for the last time during MAKS Air Show from August 16 to 21. The Russian Minister of Defense Anatoly Serdyukov, who is the first civilian Minister of Defense, signed an order on June 9 to disband both demonstration teams. The reason is the budgetary cuts in Russian Air Force.

There is a rumor about the creation of the only one display team to represent the Russian Air Force flying Yak-130 jet training planes, but it’s not confirmed yet. Most of the World’s air forces aerobatic teams fly training planes, so the Russians probably do the same. It’s more cheap and easy to support such a team.

This was not so unexpected, while the Russian Air Force is the only one in the world to have two demonstration teams and both flying fighters. Russian Knights fly with heavy fighters Su-27, while the Swifts fly MiG-29. Although the teams’ demonstrations are very rarely, so was more logical to merge both teams in one, flying only one type of fighters. In fact both teams was merged, but only when flyover the Red Square parades.

In these times of financial crisis, supporting the two fighters’ demonstration teams is so expensive. Also the Russian Knights and Strizhi fly with public very rarely and not demonstrate the high skills as others military display teams, because of the irregular training flights.

Russian Knights and Swifts were formed in 1991 at Kubinka Air Base, near Moscow. This year the teams celebrates 20th anniversary and unfortunately the last one.