Swifts and Russian Knights will transited to new aircraft 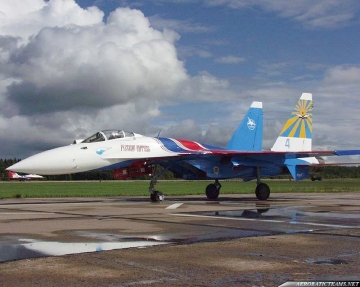 Today the Commander of Russian Air Force Gen. Lt. Viktor Bondarev confirmed that both aerobatic teams would be equipped with latest Russian fighters Su-35C and Su-30CM.

Earlier on December 18, Russian vice-premier Dmitry Rogozin signs an order to rearmament of the Russian Knights with Su-35 and Su-30 planes.

"Must fly on a new planes, showing the whole world not only inimitable skill of our military pilots, but also the talent of our aircraft designers who, despite all the problems of the past decades, are willing to give us a new reason to be proud of our country" – wrote Rogozin.

The Swifts aerobatic team also would be equipped with new aircraft, but it is not clear what type. As they announced, it seems that both teams will fly Sukhoi aircraft.

Russian Knights and Swifts will stay at Kubinka Air Base, said Bondarev, as a year earlier Ministry of Defense announced that both team would relocated to Lipetsk Air Base. He also confirmed the establishment of completely new display team flying Yak-130.

In 2003, one Su-35 was painted in Russian Knights colors, but don't take part in formation flying. The team's pilots have mastered Su-35, but now this aircraft do not fly at all and stay on the parking area as exhibits. The Su-35 flew just in some air events in solo display.