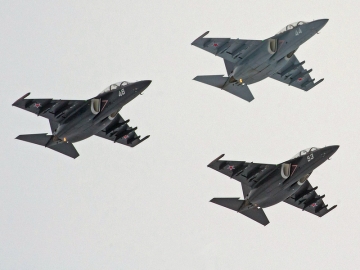 Demchenko confirmed that the team already formed and trained at Borisoglebsk Training Center near Voronezh. At the present, The Swifts Team is teaching the instructors of Yak-130. After that process all the instructors will continue training and teaching all others Yak' pilots. The final of the process is the creation of new aerobatic team of Yak-130. Then the Swifts pilots will return to fly Migs at Kubinka.

The rumors about new Russian Air Force aerobatic team that have to fly Yak-130 planes appeared in 2010, when the Russian Minister of Defense Anatoly Serdyukov signed an order on June 9 to disband Russian Knights and Swifts demonstration teams. Then some sources announced that the both teams would merge in one flying Yak-130 aircraft. Fortunately, this not happened.

In December 2012, The Commander of Russian Air Force Gen. Lt. Viktor Bondarev announced the establishment of completely new aerobatic team to fly Yak-130 and the equipment of the Russian Knights and Swifts with new fighters.