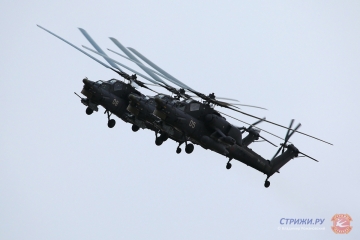 One of the Mi-28 helicopters belonging to Russian Air Force display team "Berkuts", crashed during demonstration at Dubrovichi, near Ryazan. The team participated at "Aviamix" army games, when the crash occurred. One of the pilots Colonel Igor Butenko died while the other pilot, Lt. Alexander Klepnov survived with minor injuries.

The pilots declared a hydraulic malfunction as the Mi-28 starts spinning until it crashed to the ground.

The "Berkuts" performed a four-ship bomb burst maneuver when the slot helicopter received a malfunction.

None of the ground where injured.

All Mi-28 helicopters were grounded until the crash investigation completes.