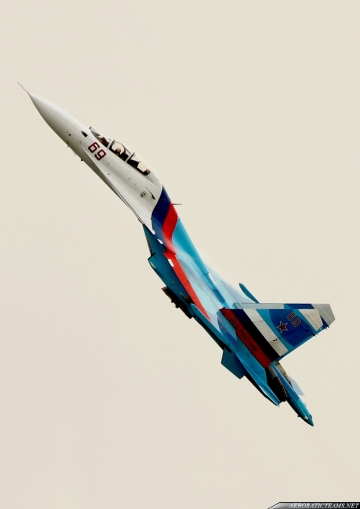 On 25 October, the Russian Air Force aerobatic team Russian Falcons performed an aerial display over Krasnoyarsk flying Su-30SM. The demonstration was part of air force recruitment air show. The team flew six aircraft by performing several loops in formation with 4 aircraft only. In a formation of six aircraft the team perform just flypasts over the city of Krasnoyarsk. The aircraft had a standard camouflage color with no special aerobatic teams livery or insignia.

At the end of 2012, The Commander of Russian Air Force Gen. Lt. Viktor Bondarev said that display teams Russian Knights and Swifts will be equipped with new aircraft such as Su-30SM and Su-35S. So far, both teams continued to fly their old planes, while Russian Falcons now fly Su-30SM. Not yet clear also, when the new announced Russian aerobatic team of Yak-130s will be officially formed.

The fact that Russian Falcons flew over Krasnoyarsk new aircraft does not mean that they will continue to use the Su-30SM permanently, as the team in the past often changed planes like MiG-29, Su-27 and sometimes flew with both simultaneously.

Makes the impression that Russian Falcons showcase very good formation flying at a close distance between aircraft during loops. Something that other Russian display teams not showing off. Unfortunately, Russian Falcons performed only loops in formation, and also a solo demonstration and imitation dogfight.