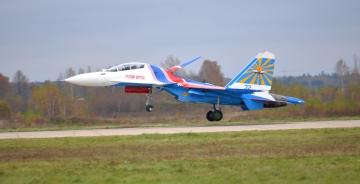 Today the first 4 new aircraft of the Russian Knights aerobatic team landed to their home base at Kubinka Air Base. The team will receive another two Sukhoi Su-30SM fighter at the end of the year.