Russian Knights and Swifts over Crimea 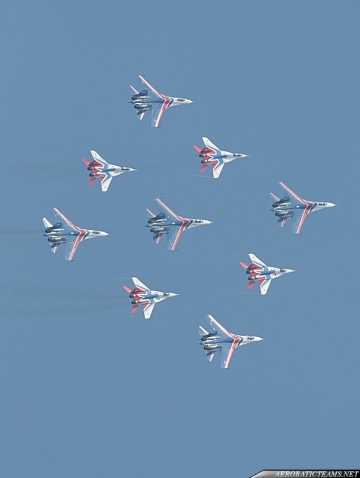 Today in the afternoon, the Russian Knights and the Swifts performed full demonstration over Sevastopol in the occasion of 69 anniversary of Victory over Nazi Germany. Of course, the main purpose was to show military power to the people of a new Russian territory - Crimea. Early at the morning, the same formation made a flypast over the Red Square and again in front of President Putin eyes.

Despite the political purposes, both teams performed a good aerobatic display in nine-diamond formation, which includes five Su-27s from Russian Knights and four MiG-29s from Swifts display teams. There is more to be desired from holding the formation closer and steady, but the pilots did not train regularly, which is the problem from many years in teams' training program.