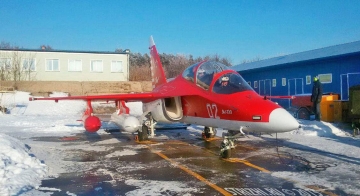 The name of the latest Russian Air Force aerobatic team will be “Wings of Tavrida” (Крылья Тавриды). Tavrida is the ancient name of Crimean Peninsula, which became part of Russian Federation.

The team will fly Yak-130 aircraft painted in red and white colors, as the first public appearance will be a fly over the Red Square in Moscow during the Victory Parade at May 9.