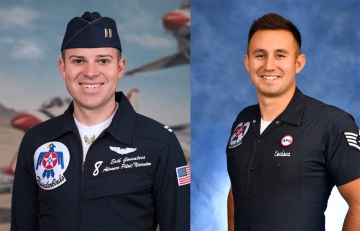 The Thunderbirds #8 F-16D jet skidded off the runway during landing and flipped on its top today, trapping two people inside the cockpit.

Pilot Capt. Erik Gonsalves and Staff Sgt. Kenneth Cordova were the occupants and were taken to Miami Valley Hospital in good condition, according to the Air Force.

Capt. Erik Gonsalves is the advance pilot/narrator for the U.S. Air Force Air Demonstration Squadron, flying the No. 8 jet, according to an Air Force biography. He entered the Air Force in 2008 as a graduate of the U.S. Air Force Academy in Colorado Springs, Colo., and he is in his first season with the Thunderbirds team.

The weather was rainy and so the runway was a wet and slippery.