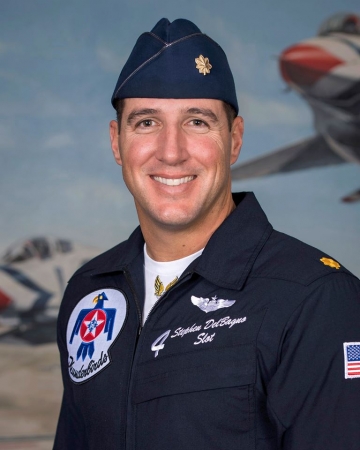 Maj. Stephen Del Bagno, #4 slot, was the pilot who was killed in the crash yesterday. This is the a very strange coincidence that the number 4 pilot in the Thunderbirds dies in crash on 4th day of the 4th month.

Del Bagno was the first Thunderbirds pilot who lost his life since 1982, when the “Diamond crash” occurs.

He was a 2005 graduate of Utah Valley State University, and commissioned from Officer Training School, Maxwell AFB, Ala. in 2007. Before joining the Air Force, Del Bagno was a civilian flight instructor, corporate pilot, skywriter, and a banner tow pilot. He enjoys snowboarding, water sports and spending time with family and friends. Prior to joining the Thunderbirds, Del Bagno served as an F-35A Evaluator Pilot and Chief of Standardization and Evaluation, 58th Fighter Squadron, Eglin AFB, Fla. He has logged more than 3,500 total flight hours in over 30 different aircraft, with 1,400 hours as an Air Force pilot. Del Bagno is in his first season with the team and hails from Valencia, Calif.