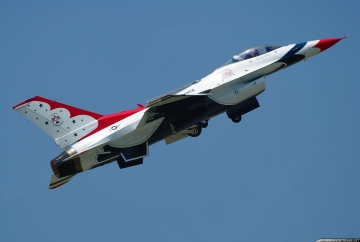 The opposing solo #6 aircraft of the team, crashed today at Widefield approximately five miles south of Peterson Air Force Base. The incident occur about 1 p.m. on June 2, after a flyover at the Air Force Academy graduation ceremony.

The pilot of the #6 Thunderbirds’ F-16C aircraft Maj. Alex Turner, ejected safely and is walking around unhurt.  Turner has over 1,500 hours in the F-16 and more than 270 combat hours over Libya and Iraq. This was his first show season with the team as he joined the team in October of 2015.

The aircraft itself belly “landed” on a grass field south of Colorado Springs and remains almost intact. No one on the ground was hurt.

President Obama, who was at the Air Force Academy graduation ceremony, met Maj. Alex Turner at Peterson Air Force Base in Colorado Springs. The president helicopter respond to the crash and fly over the crash site to ensure the pilots is ok.

President Obama shaking hands with Maj. Turner before departing on Air Force One. He thanked the pilot for his service.

Thunderbirds perform this flyover almost always at the end of May, but this time it was on June.