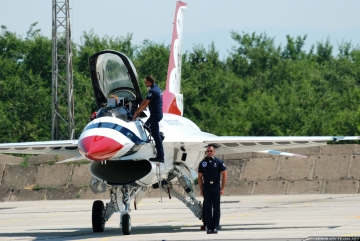 The commander of Air Combat Command, Gen. Mike Holmes, has officially selected the officers who will be joining the United States Air Force Thunderbirds for the 2018 demonstration season.

Capt. William Graeff, 88th Fighter Training Squadron, Sheppard Air Force Base, Texas, has been selected as Thunderbird No. 2, the team’s left wing pilot. He will fly as close as 3 feet from the No. 1 jet during flight formations, demonstrating the teamwork and precision of America’s Air Force. Graeff will replace Maj. Ryan Bodenheimer.

Capt. Stephen Del Bagno, 58th Fighter Squadron, Eglin Air Force Base, Florida has been selected as Thunderbird No. 4, the team’s slot pilot. Like Graeff, Del Bagno will also fly in close formation with the other demonstration pilots, just aft of the No. 1 aircraft and between the two wingmen. Del Bagno will be the first F-35 pilot to serve on the team and will replace Maj. Nick Krajicek.

Maj. Eric Gorney, 613th Air Operations Center, Hickam Air Force Base, Hawaii, will serve as Thunderbird No. 7, the team’s operations officer. His duties will include air space coordination, ground communication with the pilots in the air and safety observation. Gorney will replace Lt. Col. Kevin Walsh.

Capt. Lauren Venturini, 704th Munitions Support Squadron, Ghedi Air Base, Italy, has been selected as Thunderbird No. 10, the team’s executive officer. Her responsibilities will include leading an executive support staff responsible for Thunderbirds budget, training and force support actions for the commander. Venturini will replace Capt. Angelina Urbina.

Capt. Kassandra Mangosing, Air Force Nuclear Weapons Center, Kirtland Air Force Base, New Mexico, will serve as Thunderbird No. 11, the squadron’s maintenance officer. She will be responsible for the operational capability of 11 F-16 fighter jets and the management of more than 90 Airmen in various aircraft maintenance specialties. Mangosing will replace Maj. Warren Smith.

“The entire field of officer applicants this year was phenomenal,” Lt. Col. Jason Heard said. “The seven officers selected for the Team will no doubt bring the level of pride, precision and professionalism to uphold the tradition of excellence of our Team.”

The 12 officer positions on the team are two-year tours of duty. By design, the position openings are staggered, allowing the squadron to maintain continuity of experience and leadership. In 2018, Thunderbird Nos. 1, 3, 6, 8, and 9 will be replaced.