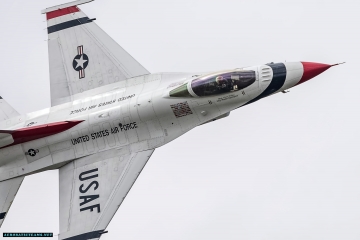 The US Air Force Thunderbirds jet crashed at 10:30 a.m. on April 4, killing the pilot.

The crash occurred at Nevada Test and Training Range during a routine aerial demonstration training flight.

The Thunderbirds are in the beginning of their air show season that started on March 10 at Luke Air Force Base Airshow.

The team’s participation at March Air Reserve Base’s “The March Field Air and Space Expo” has been canceled. It is unknown how this accident will impact the remainder of the 2018 Thunderbirds season.

The identity of the pilot is being withheld for 24 hours while his family is notified.

This is the first fatal crash in Thunderbirds history since the “Diamond crash” in 1982, when four pilots died in crash at almost the same location.

The last crash within the squadron was on June 24, 2017, when #8 F-16D jet skidded off the runway during landing and flipped on its top. Pilot Capt. Erik Gonsalves and Staff Sgt. Kenneth Cordova were the occupants and were taken to hospital in good condition.

On June 02, 2016, #6 Thunderbirds’ F-16C aircraft, crashed at Widefield approximately five miles south of Peterson Air Force Base. The incident occur about 1 p.m., after a flyover at the Air Force Academy graduation ceremony. The pilot Maj. Alex Turner, ejected safely and is walking around unhurt.

Therefore, the Thunderbirds lost three aircraft and one pilot in less than two years.

After the end of 2017 airshow season the Thunderbirds leader Lt. Col. Jason Heard was removed from the position by Brig. Gen. Jeannie Leavitt. General Leavitt lost confidence in his leadership and risk management style. Lt. Col. Kevin Walsh was chosen to become a leader of the squadron for the upcoming season.