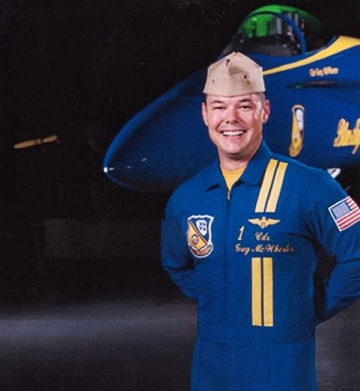 Ex-Blue Angels leader Capt. Gregory McWherter, was removed April 18 from his post as executive officer at the U.S. Naval Base Coronado in Southern California by Vice Admiral William French, commander of Navy Installations Command based on initial findings of an ongoing investigation into allegations of misconduct and an "inappropriate command climate" at the U.S. Navy Blue Angels.

On April 28, Capt. McWherter resigned also as president of the Tailhook Association, a private, nonprofit organization, which is made up of active-duty and retired military sea-based aviators.

McWherter did his first tour as commanding officer of the Blue Angels team, from November 2008 to November 2010.

He returned to lead the squadron for an emergent second tour after the then commanding officer Cmdr. Dave Koss quite the squadron following the Lynchburg Regional Air Show incident on May 22, 2010, when his flying almost crashed the team's diamond into the ground.

Capt. Greg McWherter was reassigned again as a commanding officer of the US Navy Flight Demonstration Squadron on May 2011 until November 2012.

The investigation accused McWherter that he "tolerated an inappropriate work environment" in the Blue Angels while serving as its commanding officer.

The inquiry stemmed from a complaint alleging that "lewd speech, inappropriate comments and sexually explicit humor were allowed in the workplace and in some cases encouraged by the commanding officer," the Navy said. The complaint also said there had been pornographic images displayed or shared.

Whatever this fabricated accusations, Capt. Greg McWherter stayed one of the best pilots in the NAVY and Blue Angels ever, as he is one of the fewer pilots leading Blue Angels for two tours.