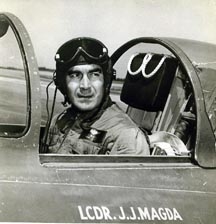 The Blue Angels will visit Bowling Green, KY in honor of Lt. Cmdr. Johnny Magda. They won't do aerial display, but will participate in the party in dedication of Aviation Heritage Park's restoration of a Magda's F-9F Panther. The Panther is painted in Blue Angels colors like was, when Magda fly in the team.

Blue Angels will arrive at 2 p.m. June 23, at Bowling Green-Warren County Regional Airport and departured in 4:30 p.m. Magda, a Western Kentucky University graduate, enlisted in the Navy on Sept. 26, 1940, rising to the rank of commander of the Blue Angels.

He served on various aircraft carriers and during the Battle of Midway in August 1942, his plane ran out of fuel after an attack on Japanese aircraft carriers and he had to ditch it in the Pacific Ocean, according to a history provided by the Aviation Heritage Park board. Magda was labeled an Ace at age 23. He was the leader of Blue Angels from 1949, and later lead the Sattan's Kitten Squadron in Korea War.

On March 9, 1951 Lcdr. Johnny Magda died when his plane hit by the ground-air missile while doing the patrol flight. He was the only one member of the Blue Angels who died in Korea.