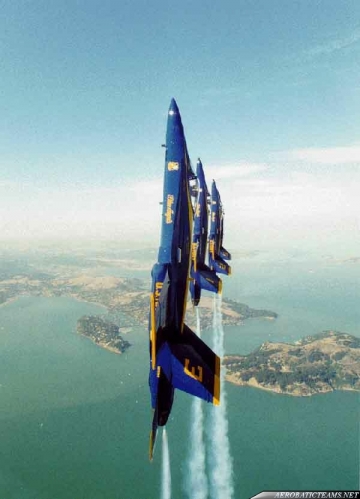 The US NAVY Flight Demonstration Team will receive a new aircraft F-18E/F Super Hornet. The date of the transition is still unknown, but likely will not be ready for 2016 season, as the team starts training in January 2016.

On Dec 3, the manufacturer of Super Hornet Boeing received a contract to draw up the engineering plans needed to convert the Super Hornet into a configuration specific to the Blue Angels.

Many of the Blue Angels aircraft are far beyond their design life, and technicians can't work fast enough at refurbishing them. Blue Angels flew F-18A/B since 1986.

During 2015 show season, there was couple of incidents, when a piece of the Blue Angels' F-18 Hornets falls from the aircraft.

On June at Rockford Airfest in Illinois, Blue Angel #5, lost the outboard leading edge maneuvering slat on its left wing during the demonstration. The aircraft landed safely, and the pilot took the spare aircraft and rejoined the demonstration just minutes after the event occurred. Just a week before the Rockford incident occurred, another one of the Blue Angel's Hornets had shed a piece in flight while maneuvering over Rochester, New York.