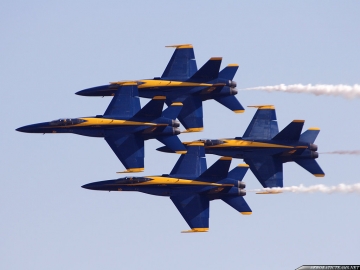 The Navy Flight Demonstration Squadron, The Blue Angels, announce the officers selected for the 2011 team. The squadron selected two F/A-18 Hornet pilots, a C-130 pilot, events coordinator, and a flight surgeon to join the team in September. The commanding officer and the public affairs officer were previously selected for the 2011 team, and a maintenance officer has been selected to join the team in 2012. "Nearly 50 highly qualified officers applied for these positions, so the competition was extremely tough," said Lt. Ben Walborn, the squadron's applications officer. "Over the course of four months, we invite the applicants to attend our shows so the team can get to know each of them personally before we select finalists. Once selected, we bring the finalists down to Pensacola during the Pensacola Beach show to interview them and make a final selection. It's a very thorough and fair process designed to select the best officers to represent the Navy and Marine Corps."

Commanding Officer: Commander David Koss of Orange Park, Fla., is currently the commanding officer of the VFA-14 "Tophatters" at Naval Air Station (NAS) Lemoore, Calif., and is a 1991 graduate of the U.S. Naval Academy. Commander Koss was selected in April 2010.

F/A-18 Hornet Pilots: Marine Maj. Brent Stevens, 34, of Knoxville, Tenn., is currently assigned to VMFAT-101 at Marine Corps Air Station (MCAS) Miramar, Calif. He is a 1999 graduate of the University of Tennessee Knoxville. Navy Lt. David Tickle, 29, of Irondale, Ala., is currently assigned to VT-7 at NAS Meridian, Miss. He is a 2002 graduate of the U.S. Naval Academy.

C-130 Aircraft Commander: Marine Capt. John Hecker, 37, of Huntsville, Ala., is currently assigned to VT-6 at NAS Whiting Field, Fla. He is a 1997 graduate of Auburn University.

Maintenance Officer: Navy Lt. Richard Mercado, 39, of Torrance, Calif., is currently assigned to Fleet Readiness Center Southeast at NAS Jacksonville, Fla. He is a 2001 graduate of Excelsior College. He will join the team in 2012.

Public Affairs Officer: Navy Lt. Katie Kelly, 28, of Elgin, Ill., is currently assigned to Navy Office of Information West. She is a 2004 graduate of the U.S. Naval Academy. She was selected to join the 2011 team in July 2009.