Blue Angels stood down for more training after almost crashed 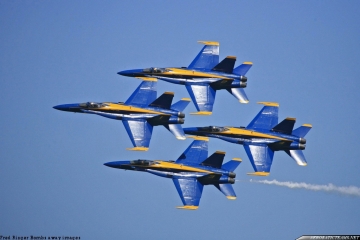 The US NAVY Flight Demonstration Squadron cancelled the airshow scheduled for May 24-25 at the U.S. Naval Academy (USNA) in Annapolis, Md. This cancellation is due to a safety stand-down period imposed by the team's commanding officer after a lower-than-normal maneuver that took place during the team's last performance at Lynchburg Regional Air Show May 22 in Lynchburg, Va.

The incident occurred, while the diamond formation executes the "Barrel Roll Break" maneuver and went too low at the exit of the maneuver. The Leader gave a command to break the maneuver and all team's F-18 Hornet planes landed interrupting the show. Obviously, the Leader's error caused the incident, as the team goes for more practice in its home base Pensacola, Florida, and is not a mechanical malfunction. Blue Angel #1 CDR Dave Koss entered the four-ship formation too low in the half-loop of the maneuver causing the Slot LT Rob Kurrle almost to hit the ground. Blue Angels diamond formation goes below 30 meters in the end of the maneuver, as the normal altitude is about 50-60 meters.

In such an accident in 1982 the whole Thunderbirds diamond formation crashed, killing all four pilots. Then the blame falls to the technical malfunction of the leader's T-38 plane.

For now is unknown how long the Blue Angels will stay out of airshow circle and which scheduled air shows will be cancelled.