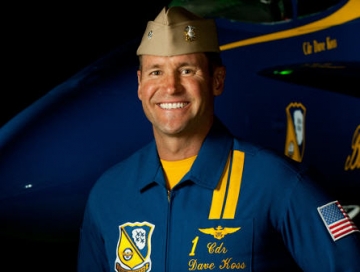 Blue Angels Commander and Leader left the squadron following the Lynchburg Regional Air Show incident on May 22, the "Boss" of Blue Angels request that Rear Adm. Bill Sizemore relieve him of his command today.

We must admire the act of Cmdr. Dave Koss, who admit his error and release the place for the new Blue Angels' leader. "With deep personal regret I shared with my command today that I will be voluntarily leaving the greatest flight demonstration team," said Koss. "I performed a maneuver that had an unacceptably low minimum altitude. This maneuver, combined with other instances of not meeting the airborne standard that makes the Blue Angels the exceptional organization that it is, led to my decision to step down. I have the utmost respect for the Sailors and Marines of the Blue Angels organization and all that they embody. The reason this team is so successful, brings thrills to millions of fans across America, and represents the U.S. Navy so superbly, is because of the absolute commitment to safety and perfection by every member of the team. I am honored to have been a part of this organization, and I look forward to watching its success in the future."

The previous Blue Angels' commanding officer and leader, Capt. Greg McWherter, will replace Koss for the duration of the season.

We wish Cmdr. Dave Koss to not despair itself and go forward, as he is not the first and probably not the last Blue Angels' leader, who left the Naval Flight Demonstration Squadron earlier. We are all humans and makes mistakes.

This move requires the cancellation of the Blue Angels' scheduled performances at the Rockford Airfest June 4-5, and the Evansville Freedom Festival Air Show June 11-12. The Blue Angels will remain in Pensacola for additional training and air show demonstration practice. Any potential changes to the team's future schedule will be announced at a later date.