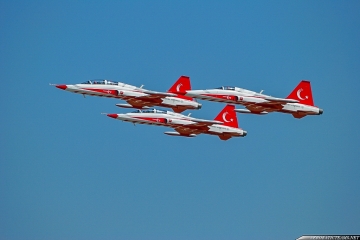 The Bucharest International Air Show 2012 held on 21-22 July at Baneasa Airport. The highlight of the show was Frecce Tricolori and Turkish Stars along with Hawks of Romania and Aerobatic Yakkers display teams.

Then the Hawks of Romania aerobatic team performed its incredible display over the Baneasa Airfield.

Then in 11'00 o'clock Turkish Stars took off in two formations of three planes and one solo. This year the team flies with seven NF-5 jet aircraft instead of eight, because of the fatal crash on March 13, when the new selected team pilot Capt. Ümit Özer lost its life in training flight. Furthermore, Turkish Stars stops using red smoke, but there was some positives happened in the team from 2012, a new livery of the planes.

After that followed the Aerobatic Yakkers which fly Yak-52 planes. The surprise was the famous pilot Jurgis Kairys, who join the Yakkers with his Su-31. These three planes performed very interesting show despite the lower maneuverability of the Yak-52s.

In 12'20 the time for Italian Air Force aerobatic team came. Nothing more than awesome to say about Frecce Tricolori display. As always, they were perfect. In difference to regular airshows, this time #6 MB339 aircraft was replace by #0, probably because of some malfunction.

Another highlight of the show was the display of Flying Bulls' BO-105 helicopter. You never believe what this kind of machine do in the air, until you see with your own eyes. Even then will still remain doubts, how a helicopter performed such a maneuvers like roll and loop.

This was only the July 21, as I was at the show only this day.