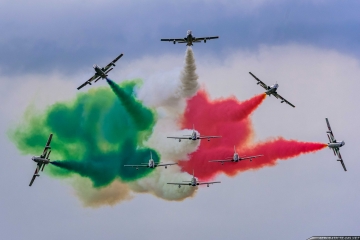 I arrived in Italy on Sept 2 to visit Venice. On the next day, I spent in this unique city and after that travelled to Rivolto, as the Sept 4 practice day, was dedicated to media representatives.

I was surprised when a saw the Saudi Hawks aerobatic team, as they were not in the list of participants before the airshow.

The flights start about 10:00 o’clock with a display of Red Devils, unfortunately only with three aircraft.

The next day, the first public day, weather was rainy and so right after Saudi Hawks took off the rain begins. The team interrupted the display after a few maneuvers. After an hour the weather become better and the other participants starts flying.

On Sept 6, I go back to my country and missed the last day of Frecce Tricolori 55 Anniversary Air Show.