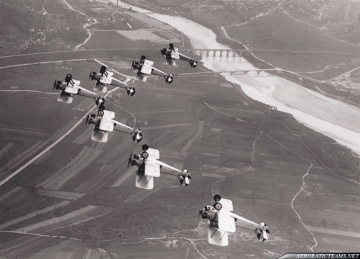 The first public aerobatic team performance in Italy dates to 12 July 1928 at Rome's Littorio airport, when two three-ship formations of Fiat CR.20 fighters from the 1st Stormo (with fighters also loaned from the 7th Stormo) perform an aerial demonstration.

In 1930, this newly created team went on a Balkan countries tour and performed in Bucharest, Belgrade, Sofia, Tirana, Istanbul and Athens.

Also in 1930, another aerobatic team was formed, flying on Breda Ba.19 airplanes from the 73rd Squadron. This team was simply named the “Squadriglia di Alta Acrobazia Aerea” (Air Demonstration Squadron). On June 5, 1938, this demonstration team participated in the Belgrade Airshow.

In 1937, a mixed group of 21 Fiat CR.32 fighters from the 4th and 6th Squadrons of Italian Air Force were loaded onboard ship and transported to South America to perform displays in Peru, Argentina, Chile and Brazil.

The first Italian aerobatic team created after the World War II were the “Cavallini Rampanti” (Prancing Horses). The team was first created in 1950 and flew De Havilland Vampire MB Mk.51 fighters until 1952, when the team was disbanded. In 1956, the team was established again under the name “Cavallino Rampante” (Prancing Horse), but this time they flew Canadair CL-13 Mk.4 (F-86 Sabre) aircraft. This later team existed only until 1957.

From 1953 until 1954, the aerobatic team “Guizzo” flew from the Villafranca air base with four F-84G “Thunderjet” fighters. The team participated at Soesterberg in the Netherlands in 1953, “stealing” the entire airshow with their low level passes and dramatic maneuvers.

The “Tigri Bianche” (White Tigers) aerobatic team also flew F-84G “Thunderjet” fighters from 1955 until 1956. They were the first Italian team to visit both Canada and the USA.

In 1959, another aerobatic team with the name “Getti Tonanti” (Thunder Jet) was created at Rimini air base. This team flew F-84F Thunderstreak fighters and lasted until 1960. This team also took part in the opening of the Olympic Games in Rome in 1960 and for this reason the team’s color scheme incorporated the Olympic Games rings and colors on the tails of their aircraft.

The “Diavoli Rossi” (Red Devils) were another Italian Air Force aerobatic display team. The team was established in 1957 from the 6th Aerobrigata at Ghedi air base and also flew F-84F “Thunderstreak” aircraft. In April 1959, “Diavoli Rossi” performed in USA at the “First World Congress of Flight” in Las Vegas, Nevada. At the end of 1959, the team was disbanded.

The “Lanceri Neri” (Black Lancers) were established in 1958 from the Italian Air Force 2nd Aerobrigata at Camerie Montichiari air base. The “Lanceri Neri” flew six Canadair-built F-86 Sabre Mk.4 aircraft. This team was also disbanded in 1959.

In 1964, the team transitioned to Italian-made Fiat G-91 fighters and continued to fly with them until 1981, when they received new Italian Aermacchi MB-339 trainers.

On July 12, 1978, two aircraft collided in mid-air during a practice over Rivolto, killing one of the pilot, Capt. Graziano Carrer.

On May 27, 1979, Capt. Pier Gianni Petri also crashed and died at the Mildenhall Airshow. This incident occurred during a “Bomb Burst” maneuver. Capt. Petri was flying a Fiat G91 which failed to recover from its dive and crashed near Beck Row. No one on the ground was injured during the accident.

The team transited to Aermacchi MB339A jet trainer aircraft in 1980. The MB339A which Frecce Tricolori fly is also known as MB339PAN (Pattuglia Acrobatica Nazionale) - a specially modified version for the team.

Another of the Frecce Tricolori pilots, Capt. Antonio Gallus, lost his life on September 2, 1981 during a routine training flight at Rivolto.

The worst accident in the aerobatic team’s history occurred on 28 August 1988 at the Ramstein airbase in West Germany. During a "heart-shaped" maneuver, at the top of a loop, the mass formation of ten airplanes separated into three smaller formations: one with five planes, another with four planes and the solo pilot. The first two formations separated from each other in opposite directions, while the solo pilot separated perpendicularly from these other two formations. They each continued this maneuver until they crossed at the bottom of the loop. The inaccurate execution of this maneuver by the solo pilot, Lt. Col. Ivo Nutarelli, then caused a collision with the first formation. The solo pilot’s #10 plane first collided with the upper surface of #2’s fuselage, and then crashed into the rear fuselage section of the #1 aircraft. The #1 aircraft spun and crashed onto #2. Then both #1 and #2 aircraft crashed onto the taxiway. One of these aircraft collided with a UH-60 Black Hawk helicopter on the ground killing its pilot who was in the cockpit. The solo aircraft hit the ground in front of spectators and eventually colliding with an ice-cream van and ultimately immediately killing 31 people. Later, another 44 people would die from their wounds. Approximately another 500 spectators where injured, and all three of the team’s pilots died. The other seven team aircraft diverted to the closest alternate airfield and landed safely at the Sembach airbase.

On 5 September 1999, two of the team's planes simultaneously experienced bird strikes in their engines during a display at the SIAD air show at Bratislava, Slovakia. Fortunately both planes landed safely but their demonstration had to be cancelled.

On 27 October 2002, the team's #10 MB339 aircraft, was involved in another bird-strike incident while landing at their home base of Rivolto, following a fly-past display. The bird was ingested into the plane's engine about 200 meters from end of the runaway aborting the landing, but both pilot ejected safely.