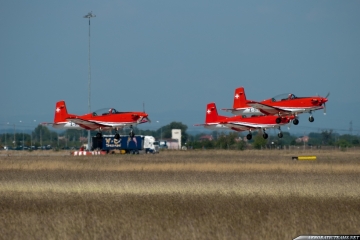 The Bulgarian Air Show BIAF 2011 dedicated to 100th Anniversary of Bulgarian Air Force was held from 3 to 4 September at Krumovo Airfield near Plovdiv.

September 2nd was the practice day and the day of the arriving of both aerobatic teams, which had to participate on that airshow, Swiss Air Force "PC-7 TEAM" and the civil one "Hawks of Romania". The Romanian display team arrived before noon, as the PC-7 TEAM about 14:00 local time. Suisse team had to perform a practice flight in about 17:15, but some organizational obstacles prevented the team's training flight. Despite this, the airshow organization was very good and for all journalists and spotters provided a very good spot.

On Sept 3, the first airshow day, the weather was variable with sun and a lot of clouds, but fortunately without any drop of rain. The first interesting moment of that day was the race between Formula 2 car and a MiG-29UB from Bulgarian Air Force. We, the spectators did not see the car at the runway, because of the higher grass at the airfield, but we saw the incident with that MiG-29. When the fighter accelerates to take off, the pilot pushes the stick too hard and hit the runway with the right nozzle. Then from the plane's back go out sparks from the nozzle's metal plates, which throw away from the plane. The pilots interrupted the demonstration and landed safely. After that, the Swedish Air Force JAS 39 Gripen performed its demonstration following by German Air Force Eurofighter and Russian MiG-29OVT. MiG-29OVT displayed incredible maneuverability by the thrust-vectoring engines.

Then in about 14:00, PC-7 TEAM takes off in three-ship formations and begins to rejoining for team's nine-ship shape. What was the surprise for me, when the team disappeared for about 15 minutes. In the second day they do the same, probably this is the team's routine. After that, they came from the front to perform very impressive demonstration.

Unfortunately, the Hawks of Romania demonstration was too late at the first day, in about 17:00 and many spectators, who go out after the PC-7 TEAM performance, missed this amazing aerial display. Unique aerobatic team, flying four EXTRA 300L and one EXTRA 330 airplanes, painted in yellow, blue and red colors.

On the Second day of the airshow, September 4, the flight program was almost the same as the Romanian Hawks team performed too early in about 10:20 and again many visitors missed their demonstration.