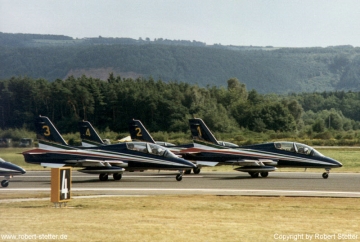 On 28 Aug 1988 in Ramstein airbase at West Germany territory, occured the worst accident in aerobatic teams history. The crash occurred in front of 300 000 people at the Flugtag '88 Air Show.

The wrong execution of this maneuver from solo pilot Lt. Col. Ivo Nutarelli, causes the collision with the first formation. Solo pilot plane #10 collide with upper surface of the #2 fuselage, then crash on rear section of the #1 fuselage. #1 start to spin and crash onto #2. Then #1 and #2 crash on taxi way. Solo plane hit the ground in front of the public, then crash onto ice-cream van killing instantly 31 people.

Later other 44 peoples dies from its injures. The approximately 500 persons where injured, and three of the team pilots died. One of the other two planes involved in the crash, hit the taxi way, crashing into the standing UH-60 Black Hawk helicopter, killing its pilot who was in the cockpit. The other seven Frecce Tricolori aircraft land on the nearest airbase Sembach.