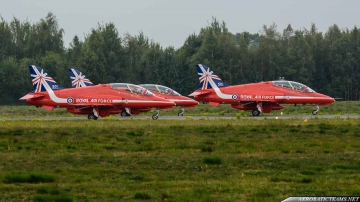 The Royal Air Force aerobatic team The Red Arrows selected a new Team Leader and three pilots for the next three years tour in the team.

Flight Lieutenant Michael Bowden, 33, who raised in Newport, south Wales, and is a graduate of Cardiff University, joined the Royal Air Force in 2002.

Flight Lieutenant Thomas Bould was born and raised in Bradford, West Yorkshire. He joined the Royal Air Force in 2005 and was the Tucano display pilot in 2010.

Flight Lieutenant Emmet Cox, 35, was educated at Long Bay College in Auckland, New Zealand, before studying at the city's university. He immigrated to the UK in 2001 and joined the Royal Air Force a year later.

The present Team Leader Squadron Leader Jim Turner – Red 1, will be replaced by Flt Lt Dave Montenegro who is a former Red Arrows pilot flying until 2011 as a Red 7.

On 23 March 2010, Flt Lt Montenegro was involved in a mid-air collision with Red 6 over Hellenic Air Force Base Kastelli in Crete. Both aircraft collided when practicing the opposing maneuver in which Red 6 and Red 7 named Synchro Pair fly against each other and cross their courses. The Red 6 Flt Lt Mike Ling, ejected safely from 300m altitude and suffered a dislocated shoulder, head and arm cuts, and the Red 7 Flt Lt Dave Montenegro, land its Hawk with broken tail and fin. The incident happened during practice flight in preparation for 2010 show season.

Squadron Leader Jim Turner will leave the RAF display team after completing his three years tour at the end of 2014. He joining the Team in 2005 and went on to fly as Red 7 in 2006, and as Synchro Leader Red 6 in 2007. After then Jim Turner assigned as a flight advisor for Saudi Hawks aerobatic team.