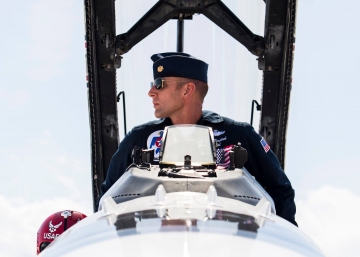 The US Air Force Demonstration Squadron – The Thunderbirds, announced the new slot pilot who complete the full six-ship airshow formation for the remainder of the 2018 show season.

Maj. Nick "Khan" Krajicek will replace the #4 Slot position after the fatal crash of Maj. Stephen Del Bagno who died on April 4th.

Krajicek is an experienced Thunderbird pilot who performed as the Slot Pilot during the 2016 and 2017 air show seasons.

Krajicek has logged more than 3,400 flight hours as a military pilot, with more than 650 hours of combat experience. He flew UH-60 Blackhawks in the Army, is an F-16C/D Fighting Falcon instructor pilot and commissioned into the Air Force in 2004.

Charleston Air Show and the Fort Lauderdale Air Show has been canceled due to training process, but the team's participation in the Laughlin AFB Air Show and the Air Power over Hampton Roads air shows are being evaluated and are dependent on the team's readiness to perform a safe 6-ship aerial demonstration.