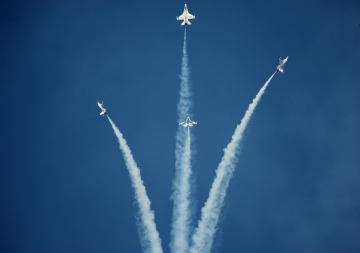 Maj. Del Bagno, who flew #4 slot position exited “High Bomb Burst” maneuver and continued to fly inverted, instead of level the aircraft, for about 22 seconds at about 5,500 to 5,700 feet above ground where he experienced up to negative -2G force. The normal procedure is to level the aircraft with half roll after the bomb burst until he reach the point where he must perform a half roll and a half loop to fly in the direction to the center point.

Maj. Del Bagno started a descending half loop maneuver called the Split-S, reaching a maximum of positive 8.56G after five seconds, the report said. The extreme G-forces from -2G to +8.56G in such a short time, caused him to lose consciousness and be absolutely incapacitated for the next five seconds.

About a second before hitting the ground he recovered somewhat and started trying to recover his F-16CM, but it was too late. He did not attempt to eject.

The April 4 Thunderbirds crash investigation report was released on Oct 16.