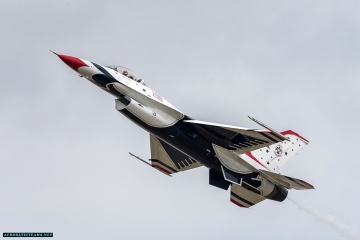 The US Air Force Thunderbirds resume practice flights after the fatal crash of Maj. Stephen Del Bagno, #4 slot on April 4.

The squadron resumed flight in five ship formation at Nevada Test and Training Range. There is no indication that the squadron seek for a slot position replacement. That could be a former slot pilot, who will complete the full six aircraft formation.

In 2016, The Blue Angels, after the deadly crash of Capt. Jeff Kuss, replaced his position with a former team pilot and continued the airshow season in full formation.

"Today, the Thunderbirds will resume practice flights over the Nevada Test and Training Range. While our hearts are still heavy with the loss of our wingman Cajun, we know he'd want us back in the air and preparing to recruit, retain and inspire once more." – said on Wednesday Lt. Col. Kevin Walsh, Thunderbirds Commander and lead pilot.

Until the further information, all displays of the Thunderbirds are cancelled, but we believe they will return in airshows soon.