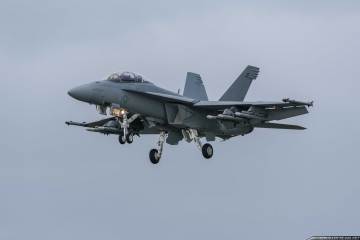 The Boeing Co. signed a contract for $12,053,076 for an engineering change proposal for the Navy Flight Demonstration Squadron Blue Angels Super Hornet Conversion.

The work expected to be complete in September 2017 and the Blue Angels to be ready to fly F/A-18E/F Super Hornets from 2018 air show season.

The Super Hornet conversion starts on Dec 3, 2015, when the manufacturer of Super Hornet - Boeing received a contract to draw up the engineering plans needed to convert the Super Hornet into a configuration specific to the Blue Angels.

The Super Hornet have some differences from previous versions: the forward fuselage is unchanged, but the remainder of the aircraft shares little with earlier F/A-18C/D models. The fuselage stretched by 34 in (86 cm) to make room for fuel and future avionics upgrades and increased the wing area by 25%. However, the Super Hornet has 42% fewer structural parts than the original Hornet design. Diamond shape intake ramps for the engines.

The new aircraft of Blue Angels should be modifying as follows: 20-millimeter nose cannons to be replaced with a smoke generator. A fuel pump inverted to allows aircraft to fly a long time inverted. A stopwatch and adjustable constant-tension stick spring installed, and the Blue Angels paint scheme.

The Blue Angels flies Hornets from 1986 and now use A,C and D modifications of F/A-18.