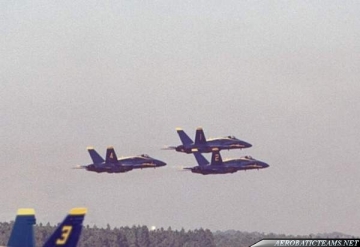 The US NAVY flight demonstration squadron Blue Angels, forced to stop their Sunday display at Bethpage Air Show due to fog.

Minutes after the take off about 2p.m., The Blue Angels cancelled their performance as the foggy weather makes the visibility bellow 4 miles, which are the minimum conditions for the aerial display of the team.

On May 7th, Blue Angels cancelled their display at Guardians of Freedom Air Show in Lincoln, this time due to smoke and haze from wildfires in Canada and Minnesota.