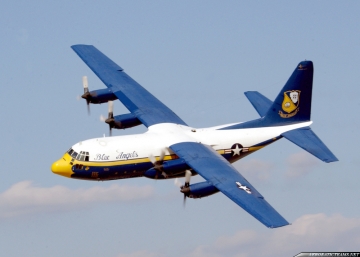 The Blue Angels cargo aircraft C-130 Fat Albert received maintenance issues just before Seattle Seafair Airshow, and would not be back to flying status any time soon.

The transport task to be given to other Marine Corps C-130.

After Seattle Seafair air show, the Blue Angels returned to their home base at Pensacola for a regular mid-season break. The teams’ next performance is scheduled Sept. 3 at the Cleveland National Air Show in Ohio.

Meanwhile, Navy Lt. Joe Hontz, spokesman of Blue Angels, said that the team has begun practices with Cmdr. Frank Weisser, a former Blue Angel pilot who returned to the team to replace Capt. Jeff Kuss position. Weisser will fly as #6 opposing solo that Kuss flew before he died in crash on June 2.

Another news involving Blue Angels from passing week is that one of the team Hornet jet aircraft would be displayed at Seattle’s Museum of Flight on loan through an arrangement with the National Naval Aviation Museum in Pensacola, Fla.