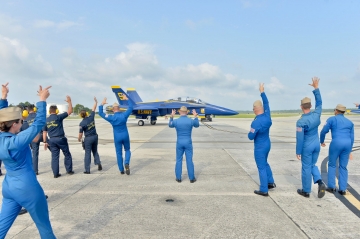 The squadron interrupted flights after a June 2, when the #6 opposing solo Capt. Jeff Kuss crashed and died during a practice flight.

The Blue Angels performed a practice flight in five aircraft, as they still seek for a replacement for #6 position, as we wrote on June 11.

“The squadron has ended its operational pause and is planning to replace the late Marine Capt. Jeff Kuss,. We’ll probably be making an announcement on that before the end of the week." Naval Air Forces spokesman Steve Fiebing told Navy Times website, which confirmed our news a week before.