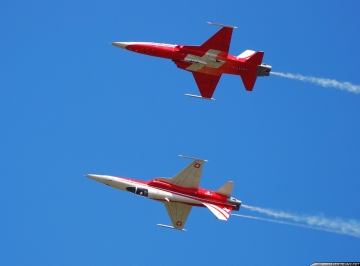 The Swiss Air Force aerobatic team Patrouille Suisse suffered their first ever crash today, when two of the team’s aircraft collided in mid-air at about 16:45.

One of the Patrouille Suisse F-5E Tiger aircraft crashed near the lake at Leeuwarden, as the other involving aircraft landed successfully with half missed right stabilizer. The pilot of the crashed F-5E succeeds to eject on time and landed unhurt.

The team practicing for the weekend airshow - Netherlands Air Force Open Days at Leeuwarden Air Base. This is the first ever crash of the team since their creation on Aug 22, 1964. In fact, Swiss Air Force planned to retire its F-5 fleet in 2016 and so the Patrouille Suisse planes also. A few years ago there were a rumors that the team to be disbanded in 2016. I hope this crash will not put the end of Patrouille Suisse.

Earlier today a Russian Knights pilot Major Sergey Eremenko died, when his Su-27 crashed near Moscow. A week ago, and again in Thursday, both US military aerobatic teams suffered a crashes. At 1p.m. Thunderbirds F-16 crashed after a flyover at Air Force Academy and the pilot ejected safely. Two hour after this incident, a Blue Angels F/A-18 crashed in preparation for Smyrna Air Show, this time killing the pilot Capt. Jeff Kuss.