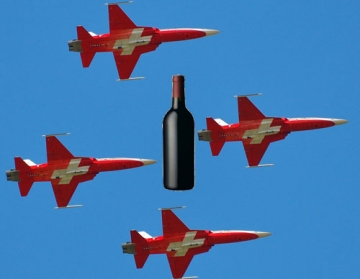 Swiss winemakers objected against Italian wine, which Patrouille Suisse used to celebrate 50th anniversary. They said that the national aerobatic team should use Swiss made wine, not Italian.

These winemakers should know that the team doesn't fly Swiss made aircraft also. Fact which probably they missed.

The bottles, feature images of the team on the label and carry the tagline "Patrouille Suisse 2014". "The wine bottles were not for sale to the public, they were only offered to the members of Patrouille Suisse" - said Air Force spokesman Laurent Savary.

Patrouille Suisse started 50th anniversary celebrations last weekend with an Air14 Air Show at Payerne airbase. On the event attended many VIP persons and foreign display teams including Italian Frecce Tricolori. At the air show attended also Charles Duke – the tenth human who walk on the Moon during Apollo 16 mission in 1972.

Of course, this is not a big issue, as the good wine is a good wine at all, no matter where is produced.