Patrouille Suisse returns to airshows, but with five aircraft 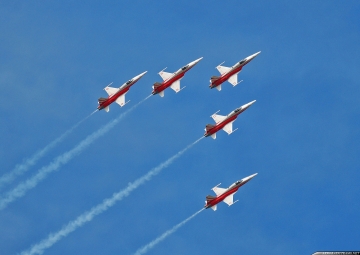 The Swiss Air Force aerobatic team Patrouille Suisse will return to the skies this weekend at 75th anniversary of the Meiringen Air Base in Switzerland, but with only five planes.

The team grounded after the crash on June 9, when two of F-5E Tiger aircraft collided in practice flight.

The two pilots Capt. Michael Duft, flying as #3 left wing and Capt .Rodolfo Freiburghaus #2 right wing collided during a practice flight for Netherlands Air Force Open Days at Leeuwarden Air Base. Capt. Duft ejected from its faulty aircraft as Capt. Freiburghaus landed its Tiger. Capt. Michael Duft suffered a broken leg after he land to the ground and will be out of service for a few months. That is why Patrouille Suisse to perform in five aircraft formation.