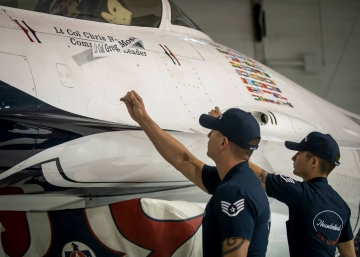 Lt. Col. Chris Hammond assumed command of the USAF Air Demonstration Squadron from Lt. Col. Gregory Moseley during a change of command ceremony held at the Thunderbird's home base. Lt. Col. Hammond will seat at the #1 aircraft as the new leader for the 2015 air show season.

Colonel Hammond graduated from Cooper High School in Abilene, TX, and continued on to the Air Force Academy to earn his Aeronautical Engineering degree in 1998. Eleven assignments after commissioning, he was assigned to Nellis AFB as the director of operations for the 16th Weapons Squadron at the USAF Weapons School. Hammond has been flying the F-16 Fighting Falcon for more than 13 years.

"I'm honored and excited about the opportunity to lead and work with extremely dedicated and highly motivated individuals who are enthusiastic about the mission the team has," said Hammond. "This will be unlike anything I've ever done in my career, but I look forward to representing our Air Force and communicating the Air Force message in the hopes of recruiting similarly motivated individuals into our service for our future force."