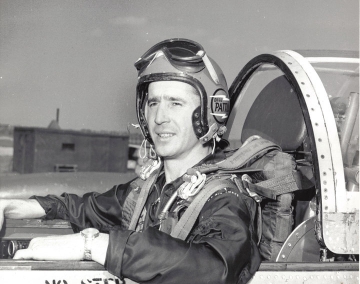 Maj. Gen. Cuthbert A. "Bill" Pattillo passed away Thursday, February 20, 2014. He died peacefully in his sleep at home in Harrisonburg, Virginia.

Bill was a legendary pilot who involved with creation of two great aerobatic teams, Skyblazers and Thunderbirds. He flew as right wing in both teams together with his twin brother Charles "Buck" Pattillo who flew left wing position.

Skyblazers were the display team that inspired the creation of most of the European's aerobatic teams in 1950s, as the team was an official demonstration team of US Air Force in Europe and was a major attraction at every airshow they participated.

Skyblazers were form in 1949, as the two Pattillo brothers flew F-80 Shooting Star and F-84E Thunderjet planes at the team until they were assigned in 1952 to Luke airbase, Arisona, where they form the aerobatic team to the Air-Training Command. This team in 1953 becomes the Thunderbirds. They flew at the same positions in Thunderbirds for a two show seasons.

"Bill" Pattillo and his brother were born seven minutes apart on June 3, 1924, in Atlanta, Georgia. He graduated from Atlanta Technical High School in 1942, and enlisted in the U.S. Army Air Corps in November 1942 as an aviation cadet.

He flew 35 combat missions with P-51D Mustang during World War II, when he shoots down one Me-262, a jet fighter aircraft. Later he was shoot down at enemy site and became a POW until the end of the war.

Major General Pattillo retired from active duty in 1980, with over 5,000 flying hours. He was awarded the Silver Star and more medals.