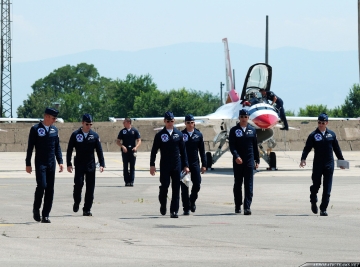 The US Air Force Demonstration Squadron Thunderbirds announced 2014 officer selections even the next season is uncertain as they cancelled almost entire 2013 due to budgetary cuts.

Lt. Col. Matthew Bradley, 83rd Fighter Weapons Squadron director of operations, Tyndall AFB, Fla., will become Thunderbird No. 1, the squadron's commander and lead pilot. As the twofold duty title implies, his responsibilities will include commanding a force of more than 100 enlisted personnel and 11 commissioned officers assigned to the Thunderbirds, along with leading all demonstration flights. Bradley will replace Lt. Col. Greg Moseley.

Maj. Scott Petz, an F-16 pilot stationed at Nellis AFB, Nev., will become Thunderbird No. 3, the team's right wing pilot. He will fly as close as 18 inches from the No. 1 jet during flight formations, demonstrating the teamwork and precision of America's Air Force. Petz will replace Maj. Caroline Jensen.

Capt. Joshua Larsen, an F-16 pilot currently stationed at Shaw AFB, S.C., will become Thunderbird No. 8, the team's advance pilot and narrator. His duties will include advancing to show sites ahead of the team, coordinating logistical details with the local show organizers, and narrating to the crowd during performances. Larsen will replace Maj. Michael Fisher.

The team is still reviewing applications for the position of Thunderbird 9, the team's flight surgeon. An announcement will be made once the selection is finalized.