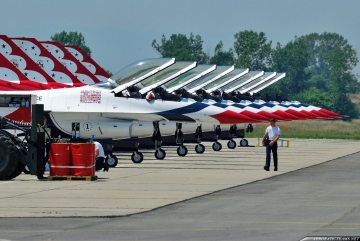 The US Government sequestrations hit the Air Force Demonstration Squadron, so the team will perform for the last at Titusville Air Show, 23-24 March. All remaining 2013 show season is cancel, beginning April 1.

Air Force will reduce flying hours by as much as 18 percent affecting all operational and training missions.

"The Air Force will reevaluate the program at the end of the fiscal year and look for ways to curtail the program without having to cancel aviation support altogether." said Brig. Gen. Les Kodlick, the director of Air Force Public Affairs.

This impacts all airshow industry as the Thunderbirds and the USAF demo flights are the major part in every US airshow and so many of them already cancelled due to budget cuts.

The demo flights are the only way taxpayers to see where and what their money goes for.

The Thunderbirds not interrupted demonstrations even during Vietnam War. Probably now the situation is worse.

US NAVY Blue Angels obviously also will be hit by sequestrations, but no official information for now is available.