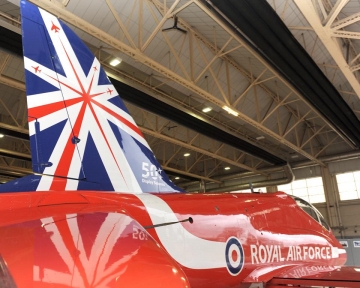 The design represents the British flag with aircraft flow by the team – Folland Gnat and BAe Hawk. This livery will remain in all 2014 display season.

The Red Arrows were formed in 1965, as the first demonstration was on 6 of May the same year at Kemble Air Base. The demonstration aims to present to media the new RAF display team. The first airshow in public is in France on May 9th the same year during the national day of French Air Force in Clermont Ferrand. The first demonstration in English public is on May 15th, 1965, during the International Aero Fair in Biggin Hill. Until the end of the first year as a team, the Red Arrows performed 65 air demonstrations in the United Kingdom, France, Italy, Netherlands, Belgium and West Germany.

First, the team flew seven Folland Gnat jet aircraft and later in 1968 begins to fly with nine planes. In 1980 the Red Arrows transited to Hawk aircraft.