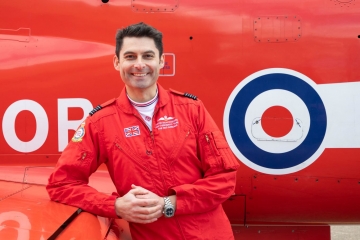 Wing Commander David Montenegro was promoted as a Commanding Officer of the Red Arrows on April 1st. He is in charge of the entire aerobatic team.

He succeeds Wing Commander Andrew Keith, who has been Commanding Officer since September 2017.

During this three-season as Red 1, he led the Red Arrows during a display tour across the Middle East and Asia, including visits to Singapore, Malaysia and performing in China for the first time in the team’s history.

On 23 March 2010, then Flt Lt Montenegro, was involved in a mid-air collision with Red 6 over Hellenic Air Force Base Kastelli in Crete. Both aircraft collided when practicing the opposing maneuver in which Red 6 and Red 7 named Synchro Pair fly against each other and cross their courses. The Red 6 Flt Lt Mike Ling, ejected safely from 300m altitude and suffered a dislocated shoulder, head and arm cuts, and the Red 7 Flt Lt Dave Montenegro, land its Hawk with broken tail and fin. The incident happened during practice flight in preparation for 2010 show season.

After leaving the Red Arrows, Wg Cdr Montenegro worked in the Typhoon Force Headquarters at RAF Coningsby, before being selected to complete a masters degree in defence and military studies at the Australian War College, Canberra.

Last week, it was announced that, given the current restrictions in the UK and many European partner nations to contain the spread of the COVID-19 Coronavirus, the decision had been taken not to send the Red Arrows overseas for work-up training this year.