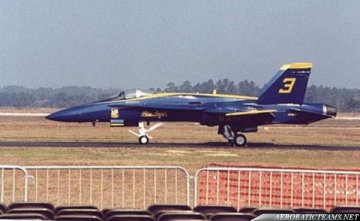 On July 15, one of the Blue Angels F-18 probably #4, makes an emergency landing during practice flight in preparation of Dayton Airshow. The pilot was reporting that he lost his right engine and was declaring an emergency. Minutes later the plane landed safely.

After two days another malfunction strikes Blue Angels at Dayton Airshow, while #6 declared engine stall during taxi. The plane cranked left, pilot did some checks, and when maintenance crew make sure everything was working, after about a 10 min delay, the show started with all 6 planes.